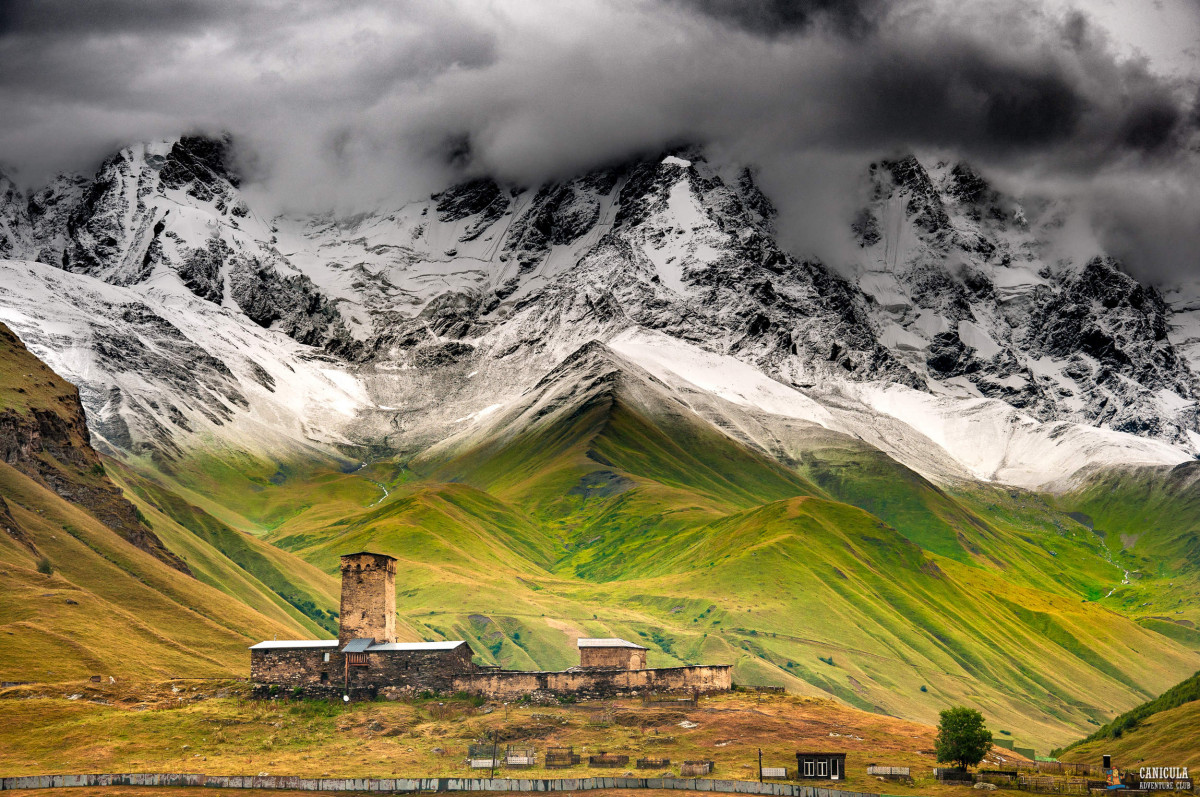 Ushguli is one of Georgia’s many beautiful sights. This small village in Svaneti is located at the foot of Shkhara mountain, near the Enguri River, at an altitude ranging from 2060 to 2200 meters above sea level. This makes Ushguli the highest settlement in Europe. Its name is supposed to be a portmanteau of “ushishari” (fearless) and “guli” (heart). The only thread connecting the village to the rest of the world is a road to the city of Lentekhi, which is only available three months a year: “I’d never imagine that life is possible in such a climate, but people seem to be used to it. As I was told, they hoard food throughout the year and thus have no problem enduring the cold season. They are very hardy people.” The British guest who follows us to Ushguli doesn’t even try to conceal his surprise. Ascending to the village is no laughing matter, although the beauty one encounters here will instantly make one forget any problems and difficulties.

Coming here in summer only requires a car, but in winter you will not be able to do so without an off-road vehicle. If you are able to brave the road to Ushguli on horseback, you will be treated to an even more unforgettable journey. A helicopter tour is also quite breathtaking.
One of Ushguli’s main sights is the IX-X century Lamaria Monastery. Father Jonah (Gelashvili) has been its abbot for four years now: “Lamaria Monastery used to be abandoned. I told Archbishop Ilarion, the Metropolite of Mestia and Upper Svaneti, to include me in his plans to rehabilitate the monastery and he agreed.” The first year was most difficult of all. The walls of the living quarters have crumbled and icy wind blew through them both in summer and winter, but the priest’s parish gradually overcame this problem and many others: “Locals are amazing people indeed. Even if they have duties to attend to, they’d rather come and help around the monastery.”
Father Jonah considers his post as the monastery’s abbot a gift from God, but also a burden: “Great people, sons of this village, stand by my side. I am a priest to the people who live closest to God! But we should also be considered border guards, because right behind our monastery there is Russia.”
Lamaria Monastery overlooks the village. It was built in the X century, and its frescos

date back to XII-XIII centuries. It was at the peak of its activity during Queen Tamar’s reign. Two towers, dubbed Tamar’s Towers, stand nearby to this day. The temple in which Tamar prayed also remains.
Recently, the Catholicos-Patriarch of Georgia, His Holiness and Beatitude Ilia II visited the Lamaria Monastery. His visit was a great honor for all of Ushguli’s residents: “The weather was terrible when we heard that His Holiness was coming, terrible to the point of making even flying impossible. The whole village gathered. People met His Holiness on horseback and escorted him to the monastery. He told the Ushgulians, “You live on holy land. You are saints.”
Ushguli is home to many holy relics. Even during communist rule, when people faced the death penaly if even a small icon was found in their homes, the village’s inhabitants managed to preserve the artifacts. Some of them are still kept inside their keepers’ homes, since they don’t trust anyone with them. If not for Ushgulians, Georgia would have lost priceless relics like the Adishi Gospel forever.
Now Ushguli is already buried under snow, but its residents don’t even bat an eyelash. They have already begun preparations for New Year’s Eve in order to make sure that any guests that come by are duly welcomed.